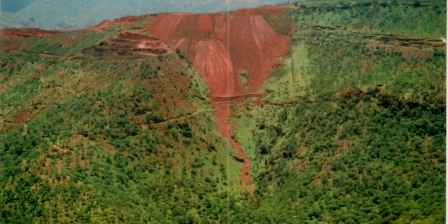 Karnataka State is bestowed with many important minerals in India. One of the important mineral available in Karnataka is Iron Ore. This occurs as Hematite/Magnetite. Out of Hematite deposits in Karnataka, Bellary District is known for its rich mineral resources, the most prominent of them being iron and manganese ores. Extensive deposits of high-grade & medium grade iron ore occur in this region in several parallel and disconnected bands at a length of about 60 kms region from Hospet (North) upto Bellary (South) Region, the estimated reserves in the district is about 1500-2000 million Tonnes. Some of the principal mines functioning at Sandur, Hospet and Bellary taluk’s are Kariganur, Vysanakeri, Jambunathanahalli, Donimalai, Ramgad, Nandihalli etc.,

Due to the cost of mining and high quality of ore export, demand has been in the upward swing providing more scope for mining activities in this region.

The development of infrastructure particularly in the field of transport sector connecting Bellary region to Chennai, Kakinada, Mangalore, Karwar, Goa and Vishakapatannam harbours by rail and highways also increased the export potentialities to China & Japan.

It is more evident that these factors increase the demand for ore and increased scope of mining activities.

China was the engine of world iron ore demand in 2003. With Chinese crude steel output reaching over 220 Mts, its import demand for iron ore grew up by 33 per cent.

China passed Japan as the world’s largest iron ore importer. Together with their largest importer, the Republic of Korea, these countries account for 60 percent of total world imports.

Iron ore seaborne trade set a new all time high at some 520 Mts in 2003. Spot iron ore freight rates shoot up and earlier unheard of levels were recorded in early 2004.

Annual price negotiations in 2004 were much smoother than in the last two years. The price increase over 2003 is 18.62 per cent, the second highest ever recorded. In constant dollars or in other currencies, however, the price is far from a record.

World steel consumption increased by 7.3 per cent in 2003. In 2004 and 2005 growth rates were anticipated to fall somewhat which did not happen actually. China will continue to account for most of the growth in global steel consumption.

For the medium term outlook, the massive projected increase of iron ore mining capacity i.e., 450 Mts to come on stream until 2009, of which over 250 Mts is considered to be dedicated and the balance is more speculative and may not come into operation as planned which may overshoot demand projections in the next three to four years, particularly if China’s demand fail to grow at the expected rate. However, iron ore producers are used to manage supply and to time capacity additions so as to match the increase in demand

This would seem to point-out a situation with continued strong demand for iron ore and a finely balanced world market over at least the next five years and possibly longer, depending on both developments in the world economy and the speed with which new capacity can be brought into production. In view of the fact that new iron ore capacity is continuously coming on stream, it is likely that iron ore price has increased in 2008 when compared to 2007.

As this is a 100% Export Oriented Unit, we supply only to International Markets.